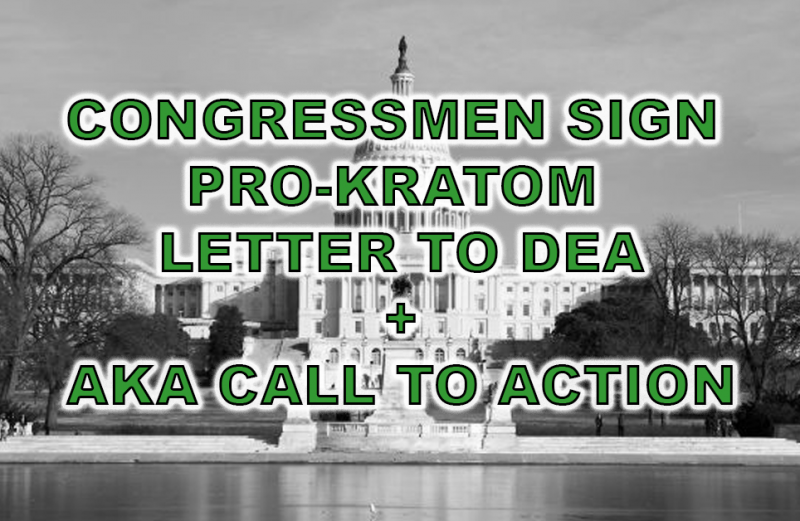 In an effort to prevent kratom from being scheduled as a controlled substance by the Drug Enforcement Agency, the American Kratom Association has been hard at work lobbying Congress. Due to the activism and diligence of the kratom advocacy group, two Congressmen, Rep Mark Pocan (D-WI) and Rep Frank LoBiondo (R-NJ), have agreed to sign a bi-partisan letter urging the DEA to review all available science and consider that scheduling kratom could have adverse consequences.

As most kratom users and supporters know, in August of 2016, the DEA announced their intent to use emergency powers to add kratom as a controlled substance under Schedule 1, making it a federal felony to possess or distribute. Thanks to a massive constituent outcry and the support of over 50 Congressman and 10 US Senators, in October of 2016 the DEA announced that they were backing away from their emergency scheduling of kratom. The DEA stated that they would instead seek further public comment and call on the Food and Drug Administration to conduct a scientific review of kratom and it’s active alkaloids. The FDA has finished their review and has sent their findings to the DEA. If the November 14th Press Statement on Kratom by FDA Commissioner Scott Gottlieb is any indication of the federal agency’s findings on kratom, they did not paint a positive picture for the DEA.

In an attempt to overcome the FDA/DEA’s efforts to ban kratom, the American Kratom Association is calling on kratom users and health freedom advocates to contact their Congressperson and encourage them to sign on to the Pocan/Lobiando letter. The AKA has posted on their website detailed instructions on how kratom supporters can take action including links to find contact information for their representatives as well as suggested talking points to share with the staffers who answer the phones.

While the future legality of kratom is uncertain, it’s the activism of the kratom community that can make the difference. In the 2016 battle to keep kratom legal, activist phone calls, emails, and letters had a huge impact on encouraging legislators to speak out.  Contact your representatives today and tell them to sign on to the Pocan/Lobiando Letter.

Click here for AKA Call to Action and Instructions